Tell Me A Tattoo Story 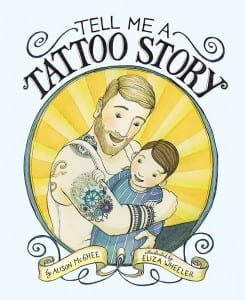 I have illustrations in two picture books releasing this year. The first is TELL ME A TATTOO STORY, written by Alison McGhee and published by Chronicle Books, came out this spring.

In TELL ME A TATTOO STORY, a father tells his little son the story behind each of his tattoos, and together they go on a beautiful journey through family history. There’s a tattoo from a favorite book his mother used to read him, one from something his father used to tell him, and one from the longest trip he ever took. And there is a little heart with numbers inside—which might be the best tattoo of them all.

I share about the process of making the art for this book in this post on my ‘Picture Book Builders’ group blog, The Story of TATTOO STORY, where you can read about how I developed the characters, sketches, and a color story throughout. 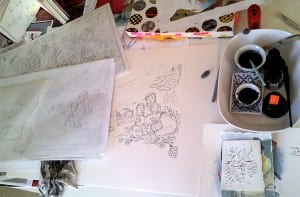 One story behind this book that I haven’t shared about yet is one about the cover art. The original sketch for the cover was to show the father in this arm-flexing position, as if he’s showing off his muscles, but he’s actually sharing his tattoo story. When the publisher, Chronicle Books, shared this sketch with international publishers at the Bologna Book Fair in Italy, they pointed out that this arm position is offensive in Italy (the equivalent of dropping an F-bomb). Yikes! Luckily this was discovered in the pre-publication stage, and we were able to change the position of the father to an embracing pose for the final cover. 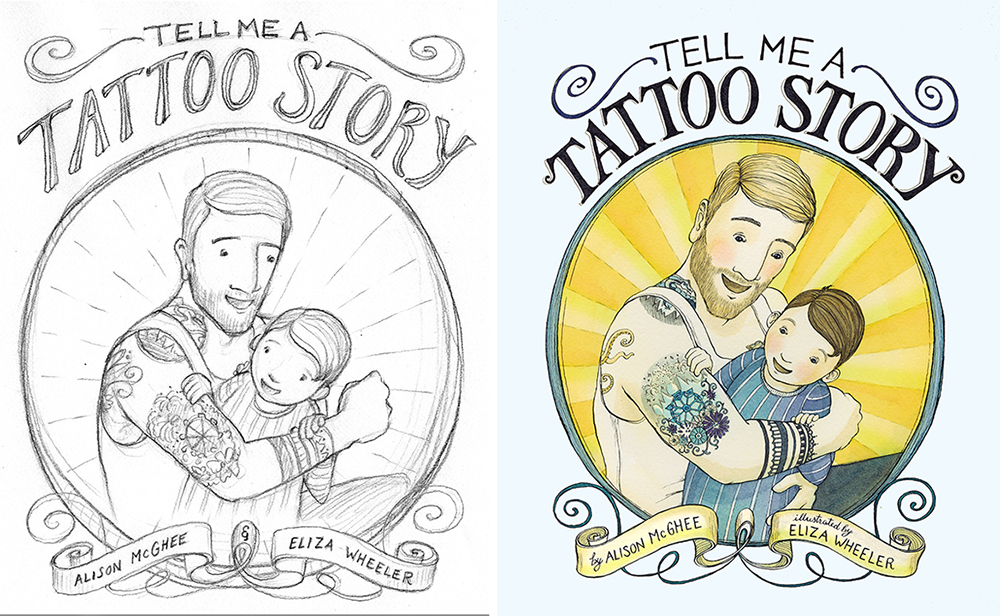 When getting inspired to illustrate this story, I found myself staring at the tattooed folks all around my neighborhood (and then usually had to apologize and explain why I was studying their tattoos). I also frequented a great shop, Wacko Soap Plant, around the corner from my apartment to capitalize on their great collection of tattoo books (like this one). 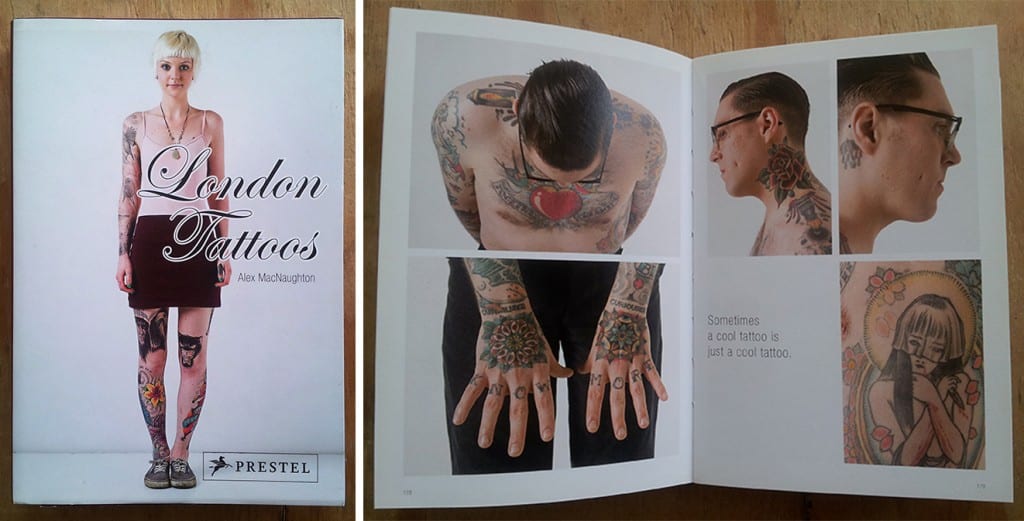 It’s been a lot of fun to see this unique book go out into the world, and I’ll admit that I wasn’t exactly sure how it would be received by the world at large (being a picture book about tattoos and all) — but what I did know was that this book has an audience of tattooed parents who would be certain to appreciate it. Luckily, this story seems to be finding that audience, and some lovely reviews have been the icing on the cake! Here’s a highlight: 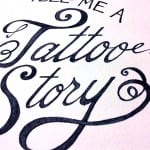 The New York Times: “Tell Me a Tattoo Story,” by Alison McGhee and illustrated by Eliza Wheeler, seems, at first glance, written specifically for the hipster parent who longs to see himself reflected in literature, tat sleeves and all. Here, tattoos are emblems of personal history, as a father describes to his son what inspired each one. The first is from his favorite childhood book, the next — the phrase “Be Kind” — was something his own dad said to him. Wheeler’s lush, detailed images beautifully dramatize each moment from the father’s past, and we move seamlessly between the present to these memories.

I was also able to share and sign TATTOO STORY at the Los Angeles Times Festival of Books in April, and Chronicle books set me up on a lovely discussion panel of Picture Book illustrators with Dan Santat, Nikki McClure, Jose Lozano, and Lee Wind. 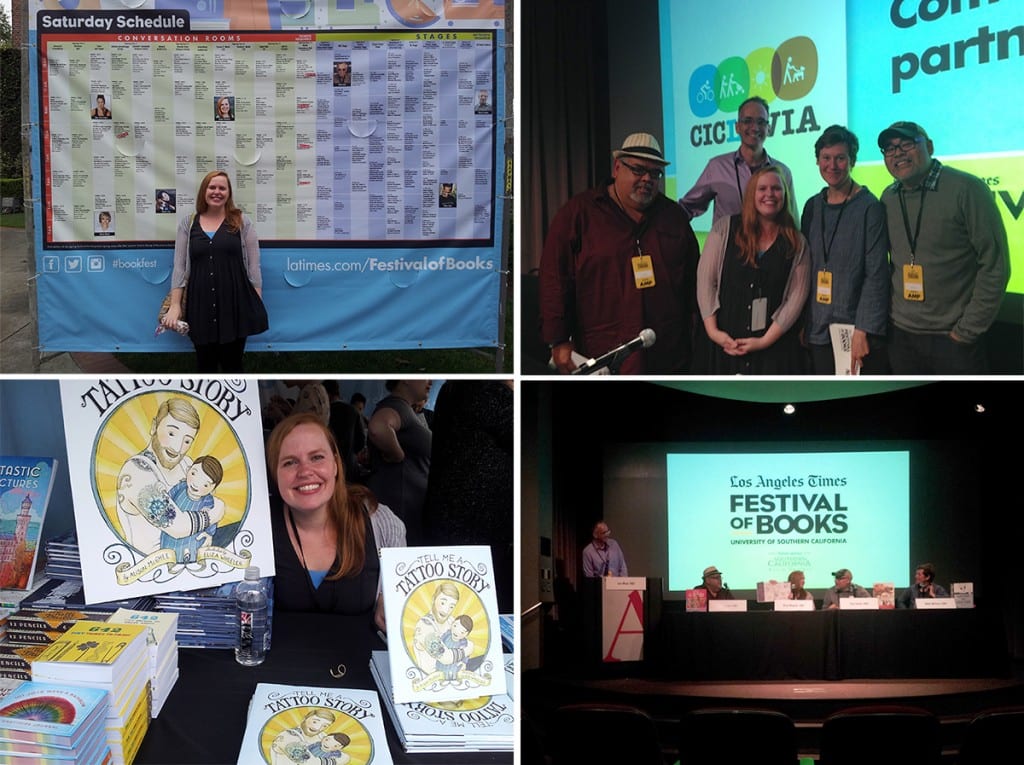 For more?
Blogger and reviewer Jules Danielson wrote this sweet article about TELL ME A TATTOO STORY.
Alison McGhee collected and shared tattoo stories on her blog, and here’s one of my favorites.
Alex Cohen of Southern California Public Radio conducted an interview with Alison McGhee here.
You can Buy ‘Tell Me A Tattoo Story’ HERE! 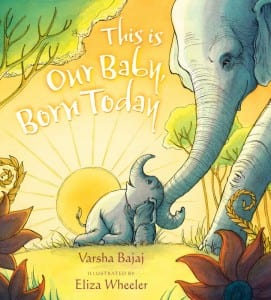 This year’s second picture book with my illustrations is coming out August 2nd, 2016: THIS IS OUR BABY, BORN TODAY by Varsha Bajaj, published by Nancy Paulsen/Penguin Books. I look forward to sharing more about this book in the coming weeks!

Posted in Book Projects, Tell Me A Tattoo Story