Eliza Wheeler is the illustrator-author of Home in the Woods and the NYT bestselling picture book Miss Maple’s Seeds. She was a recipient of the Sendak Fellowship Award, and has illustrated numerous books for children, including Newbery Honor book Doll Bones (Holly Black), When I'm With You and Wherever You Go (Pat Zietlow Miller), and John Ronald’s Dragons: Story of J.R.R. Tolkien (Caroline McAlister). She grew up in the northwoods of Wisconsin, and now lives with her husband in Minneapolis, Minnesota.

*Please Note: Eliza works on children’s books exclusively with traditional publishers, and is not available for hire or collaboration on projects with authors or self-publishers. 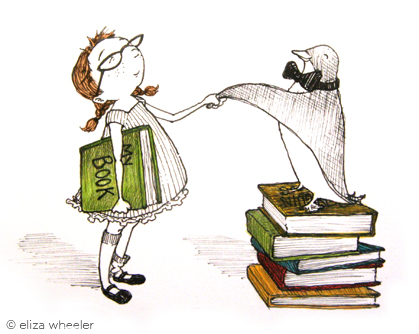 Eliza Wheeler was born in Duluth, Minnesota and grew up in the small village of Solon Springs, Wisconsin, just south of Lake Superior where the headwaters of the St. Croix and Brule Rivers meet. She was strongly influenced by the wilderness and seasons of Wisconsin, and also by her family of teachers, musicians, and artists. Drawing was her favorite form of play as a child, her emotional outlet as a teen, and her passion as an adult.

Eliza went to the University of Wisconsin-Stout, from 2001-2006, for a Bachelor of Arts degree with a concentration in graphic design. After graduating, she moved to Los Angeles with her designer/filmmaker husband, Adam Wheeler, and spent several years working as an in-house and freelance designer before realizing that graphic design is a terrible profession for someone who hates working on the computer as much as she does. She returned to paper and ink, and began exploring the idea of pursuing illustration work. In 2009, Eliza attended her first conference of The Society of Children’s Book Writers and Illustrators (SCBWI) and, after the first keynote speech, she knew she had found her creative “home” and began building her illustration portfolio and writing picture book manuscripts.

In 2010, she received the SCBWI Los Angeles National Conference portfolio mentorship award, and the next year won the portfolio showcase grand prize—a trip to New York to meet with publishers. In 2012, she signed a contract for her first self-authored picture book, MISS MAPLE’S SEEDS, with editor Nancy Paulsen at Penguin Books, which released in 2013 and debuted on the New York Times Bestseller List.

In 2017, Eliza received the prestigious Sendak Fellowship Award, which was a paid month-long illustration retreat to Scotch Hill Farm in upstate New York, owned by the late Maurice Sendak. It was there that she created a mock-up for her second self-authored picture book, HOME IN THE WOODS, a story inspired by her grandmother’s childhood in northern Wisconsin during the Great Depression. The book will be published by Nancy Paulsen/Penguin Random House Books in the fall of 2019.

Her love of children’s literature allows her to experience her own childhood again—to reconnected with and express her imagination as vividly as when she was building forts in the woods and playing with dolls. Little has changed; only now those worlds she imagined then she has the ability to capture and share now in the form of pictures and words.

Hi! Before contacting me, please read:

– I do not currently do school visits, but please feel free to send me contact info for your school or program and I’ll add you to the list of those interested. If/when I develop a program, you’ll be the first to know!

– I, unfortunately, do not have time to give out free critiques, project advice, or career advice…writers and illustrators interested in the children’s book industry can find great info at Underdown.org and join The Society of Children’s Book Writers and Illustrators at SCBWI.org.

Thanks very much,
~Eliza

Email me at: eliza (at) wheelerstudio (dot) com