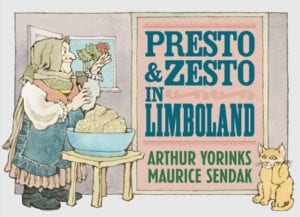 Last week was the release of Arthur Yorinks’ new book, PRESTO AND ZESTO IN LIMBOLAND, which is his lost collaboration with Maurice Sendak. The book launch held at the New York Public Library looked fabulous, one worthy of the author and illustrator. I so wish I could have made the trip in person to celebrate with the Sendak Fellowship family!

In May 2017, I had the honor of spending a month on the former farm of Maurice Sendak, attending the Sendak Fellowship retreat, hosted by The Maurice Sendak Foundation; Lynn Caponera, Dona Ann McAdams, and Arthur Yorinks. The experience was, in one word, incandescent. 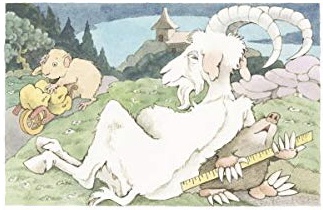 The Fellows (Terry and Eric Fan, Rashin, and I) were given a sneak peek of Maurice’s orginal art for PRESTO AND ZESTO IN LIMBOLAND, and were able to hear the story of this artwork, which was lost for many years, and then found in Maurice’s archives. Arthur had written a story to go along with Maurice’s artwork many years ago, but both the author and illustrator got busy with other things and the project fell by the wayside.

Here’s a Newsweek article written about the project:
A New Book From ‘Where the Wild Things Are’ Author Maurice Sendak, Six Years After His Death

And here’s an interview with Arthur on NPR.

Arthur served as a mentor during our time at the Sendak Fellowship Retreat, and gave inspiring talks to us about books, film, art, and writing. Living in and amongst Maurice’s belongings and hearing the stories about him from Dona, Lynn, and Arthur made it feel as if we had spent time with Maurice himself.

There are so many more things I want to, and have been meaning to, share about that experience, but for now, I’m sending all my best wishes and congratulations to Arthur Yorinks and the Maurice Sendak Foundation on the release of this amazing project!